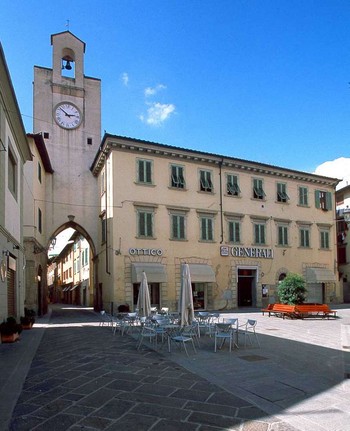 Borgo San Lorenzo is one of the most important boroughs in the Mugello territory. It was founded in a place where an antique Roman borough once stood and it is because of its location, near the roads that connect Florence, Faentina and Bologna, that Borgo San Lorenzo enjoys a good economy mostly due to tourism in Toscana. In 1273, it became a municipal but for centuries was an area of struggle and violence due its central position which made it a bypass especially during war periods. The battles caused the destruction of many buildings and the little is left of the walls built in 1351 but the center of the village has been almost completely restored over the years. Its logistical importance for commerce as well as the history it displays, make Borgo San Lorenzo an attractive visiting place filled with activities for locals and tourists alike. Sacred monuments to admire include the Pieve (Parish) of San Lorenzo, dating back to end of the 10th century. The bell tower was built in 1236 during renovations of the original structure. Inside, one can admire a Giotto masterpiece: "Madonna with Child" as well as frescoes done by Galileo Chini. Another notable religious monument is the Oratory of Madonna dei Tre Fiumi containing a 16th century "Madonna with Child" ascribed to Jacopo Chimenti and legend tells that here the Virgin Mary appeared to her devoted. The Praetorian Palace, today seat of the municipal council, library and historical archive, was built at the end of the 14th century, but its present appearance is due to renovations undertaken in 1935, after an earthquake which devastated Mugello in 1919. The facade demonstrate the coat of arms of all the magistrates who ruled the town. On the walls inside one can find frescoes ascribed to Chino Chini and the Florentine school. The Museum of the Chini Manufactures, located in the 13th century Villa Pecori Giraldi, is a very noted visiting place in Borgo San Lorenzo. In 1906 Galileo Chini and his cousin Chino, founded the "San Lorenzo Furnaces", a firm producing vases, modern objects and glass products. A lot of art which adorn the parish churches and palaces in this area have been produced here. Many decorations in liberty style were in fact, designed and realized by the furnaces and can be seen not only in its remarkable interiors but all around the town. Moreover, Borgo San Lorenzo celebrates many village festivals and events, with the most important being in honor of the patron saint, Saint Lorenzo, on August 11th. Other events include "Live the sport", or the famous race 100 Km del Passatore, where people gather together along the main roads to cheer and watch marathon runners.