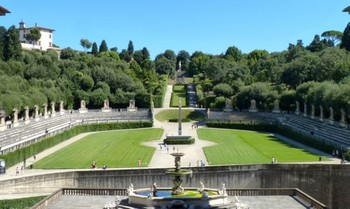 The Boboli Gardens began to take life around 1550 when Pitti Palace was purchased by Duke Cosimo of the Medici's. A big part of Cosimo's plan to enlarge the estate included the elaboration of the exquisite garden park behind the palace on the slopes of the Boboli hill. The first architect to design the gardens was Niccolò Pericolo, also nicknamed Tribolo, who had already designed other gardens for the Medici family. Tribolo worked on the gardens for eight years, until the time of his death. But work on the exquisite gardens was far from complete and it was the job of Bartholomew Ammannati and Bernard Buontalenti to carry on with the work of enriching the park. Fountains, like Neptune and Ocean, and statues can be found throughout the grounds. Giulio and Alfonso Parigi, father and son, created the Amphitheater, an elegant setting for theatrical performances enjoyed by the Medici's and their friends. The Parigi's also created the "Viottolone", a cypress lined path, and the pond and square of Isolotto. New creations to the gardens were continuously added throughout the centuries like the addition of the Coffeehouse in 1774, the Lawn of Columns in 1776, when the gardens were opened to the public. The Lemon Orchard was done in 1785 and the Lorraine Family made other changes as well, well into the 19th century. Unfortunately, because of lack of municipal funds, the Boboli Gardens have been neglected in recent years, although they can still be visited by the public, but one needs to imagine themselves in a time past when the gardens were full of life to really appreciate the grandeur and commitment that went in to their creation.