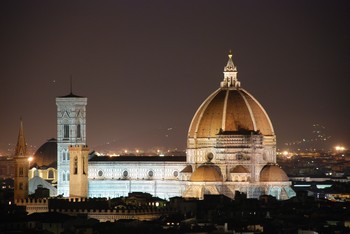 The Florence Cathedral and Piazza del Duomo have been the center of religious life in Florence for over some 1,600 years and contains numerous monuments that include the Baptistery of Saint John, the Cathedral (Duomo) of Santa Maria del Fiore, Giotto's Bell Tower, the Museum dell'Opera del Duomo, the Cathedral Canonries , the Lay Confraternity of Mercy, the Bigallo Portico, the Archbishop's Palace, the Column of Saint Zanobius (1384) and the Pisan porphyry columns (1117). The square began to take shape around the 13th century with the expansion of medieval Florence. But long before the square we see today was completed, Saint John's Baptistery, the oldest building in the square, was present as a pagan temple for centuries, before being converted to a Christian entity, completely surrounded by a cemetery. In the 11th century, the Baptistery was enlarged and enhanced with marble and other precious materials and later in the 12th and 13th centuries it was enlarged again with the dome. The exterior decorations, for which the Baptistery is famous for, took shape between the 14th and 16th centuries with the addition of the three sets of bronze doors and the bronze and the marble statues, illustrating biblical stories, above them. The oldest doors, done in 1330 by Andrea Pisano, depict the life of John the Baptist, titular saint of the Baptistery and the city's patron, and are found on the south side. The doors on the north side were done by Lorenzo Ghiberti between 1402-1425 and depict the life of Jesus Christ. On the east side of the baptistery we find the "Gates of Paradise" with scenes from the Old Testament, created by Lorenzo Ghiberti between 1425-1452. The originals can be found in the Museum dell'Opera del Duomo but what we see on the doors now are copies. The dome in the baptistery contains exquisite mosaics that include the Last Judgement, the Choirs of Angels, Stories from the Book of Genesis, Stories of Joseph, Stories of Mary and Christ and Stories of Saint John the Baptist. The old cathedral of Santa Reparata didn't seem to stand up to the beauty of the new and improved dome as well as other grand cathedrals in Tuscany like those in Siena and Pisa, and Florence wanted its church to be the grandest of all, thus the church of Santa Maria del Fiore was created on the ancient site of the original 5th century church of Santa Reparata. The first stone of the Cathedral was laid in 1296 and in 1334 the Bell Tower was started by Giotto and continued by Andrea Pisano after his death, but it wasn't until 1359 that it was finished by Francesco Talenti. In 1412, the new name of Santa Maria del Fiore was given to the church. The immense dome, designed by Filippo Brunelleschi, took 16 years to complete (1418 to 1434) but it wasn't until 1436, that the church was consecrated by Pope Eugenius IV. Architect Francesco Talenti was later in charge of further construction with the addition of the gilt copper ball and cross by Verrocchio, set in place in 1466. Later, between 1572 and 1579, Giorgio Vasari and Federico Zuccari added other painted decorations to the dome keeping to the same theme of the Baptistery. The sculptural decoration of the tower include 56 relief carvings in two registers, and 16 life-size statues in the niches, all done by 14th and 15th Florentine masters which include Andrea Pisano, Donatello, Luca Della Robbia. Most of the decorations we see today are copies of the originals which can be found in the Museum dell'Opera. The façade was redone again between 1871 and 1887 by a design of Emilio De Fabris.