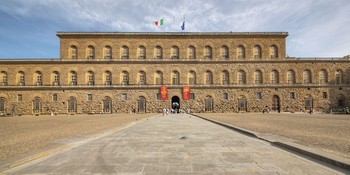 Pitti Palace was opened to the public in the early 1900's and contains numerous art collections and pieces that are admired by millions of visitors from around the world each year. The architecture and history of Pitti Palace dates back to 1458 and Luca Pitti, a prominent and wealthy Florentine banker, who built the original palace because he wanted a palace that would overshadow the Medici palace. Work on the palace was stopped in 1465 before it was completed and Luca Pitti died in 1472 therefore never to see his dream come true. His family, however, continued to live there and managed to maintain the enormous estate up until 1549 when Buonaccorso Pitti was forced to sell the palace due to the lack of funds and ironically, it was sold to the wife of Cosimo I of the Medici's. The Renaissance palace contains numerous museums and galleries with work from world renown artists like Raphael, Titan, Correggio and Rubens that can be found in the Palatine gallery, the most visited. Pitti Palace also holds a collection of the portraits of the Medici family in the Royal Apartments and the Gallery of Modern Art, extending through some 30 rooms, includes work by artists of the Macchiaioli movement and other Italian schools from the late 19th and early 20th centuries. The Palace also includes a Silver Museum which shows a collection of priceless jewellery and silver decorated with frescoes from the 17th century. Surprisingly so, Pitti Palace also holds the Museum of Zoology and Natural History, extending through 34 rooms displaying a large collection of natural curiosities such as fossils, minerals, and exotic plants. The Carriages Museum, on the ground floor, has exhibits of carriages and other conveyances used by the Grand Ducal court in the 18th and 19th centuries and the Porcelain Museum can be found in the Boboli Gardens behind the Palace and the Costume Gallery, containing a collection of theatrical costumes and garments worn by the Medici family, is also interesting to see.