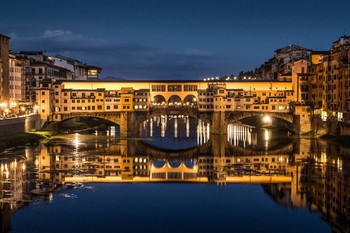 Ponte Vecchio means "Old "Bridge" and when one imagines Florence, this bridge is surely part of the visual image of what makes Florence one of the most admired cities of art in the world. The bridge is one of the oldest segmental arched bridges in Europe. The original bridge was built in wood but destroyed by a great flood of the Arno River in 1117 and rebuilt again but with the same fate of destruction by another flood some 200 years later. In 1335 the bridge was rebuilt again but this time in stone in order to protect it from other floods, unfortunately a repeated occurrence in Florence. Today the bridge is lined with jewelry shops where one can admire windows lined with gold, but at the beginning, during the 12th century, the first merchants to set up shop were mostly butchers, blacksmiths and tanners who sold their goods and services primarily to the soldiers who crossed it. The black plague of 1348 brought devastating changes to Florence but the wealth of the Medici Family, who moved there shortly after, helped bring the city to its feet again but it wasn't until almost 2 centuries that Ponte Vecchio and the polluted Arno River saw other changes when the butchers and tanners were sent away and replaced by goldsmiths and artists by Ferdinand I of the Medici's. He also had the Vasari corridor, the corridor that runs above the bridge, built in 1565 in order to allow him to walk from his residence of the Pitti Palace to Palazzo Vecchio not only to avoid the threat of being harmed by an outsider but to avoid the stench of the butchers before he decided to send them away. Ponte Vecchio is also a very fortunate bridge being the only one of the four bridges in Florence during World War II not to be bombed.