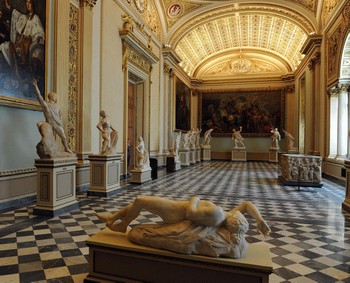 The word Uffizi means offices and the origins of this palace were for the objective of housing government offices for those ruling Florence. It was in 1560, during the reign of Cosimo I, whose statue in bronze can be seen in the piazza that surrounds the Uffizi, that the palace came to life. It was designed by Giorgio Vasari but later finished by Buontalenti and Alfonso Parigi due to Vasari's death before the project was finished. The two main bodies of the building are joined by a large corridor with six arched windows that overlook the River Arno, giving it the form of a "horseshoe". The Vasari Corridor, also built by Vasari in 1565, was designed to link the Uffizi Gallery with Pitti Palace, extending over Ponte Vecchio, and also hosts an exquisite collection of self-portraits residence of the Grand Duke Cosimo. The Uffizi Gallery, originally created in 1581 for Francesco de'Medici, is found on the second floor and is one of the most admired art galleries in the world, exhibiting works by world renowned artists like Michelangelo, Leonardo, Giotto, Raphael, Cimabue, Botticelli and Caravaggio.