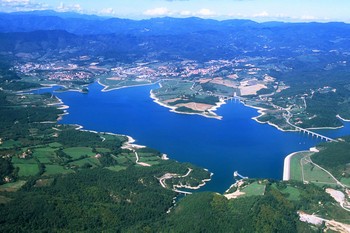 Over 10 million years ago, in the Mugello territory, the compressing thrusts of the continents formed a huge basin into which the many different watercourses with no other outlet flowed forming a lake. The basin extended for about 300 square kilometres: from the Calvana Mountains to the Vicchio valley wall. The sediments that were later carried along by the streams and rivers meant the end of the lake, and replaced it with a flat fertile land. Like it did then, today the valley holds a great quantity of water. The man-made Lake Bilancino, just a few minutes from the Barberino exit of the highway, fills one of the parts of the ancient basin. It holds 69 million cubic metres of water, is 31 metres deep, in its deepest point, and covers an area of 5 square kilometres. The lake was created to resolve the problems of both flooding and drought in the Florence area but today an affluent tourist attraction that offers numerous outdoor sports. Besides competitive fishing, in fact, the lake offers a number of water sports like canoeing, sailing and windsurfing, not only for the Mugello territory but the whole Tuscan region. On the northeast banks of Lake Bilancino, near the town of Galliano in Barberino di Mugello, you can find the WWF Gabbianello Oasis. The Oasis is a natural habitat created for the preservation of humid habitats, those most at risk of extinction all over Italy and Europe. The oasis was given an ANPIL (Local Territory Reserve) classification in the "Sistema Regionale delle Aree Protette della Toscana" - Tuscan Regional Reserves - and is a part of the National Oasis System, WWF, Italy. Set in a magnificent natural environment, among forests of evergreen and deciduous trees, meadows and organically cultivated lands, it covers an area of 25 hectares with 8 of them covered in ground level water near the Lake, surrounded by the Tuscan-Romagna Apennine mountains and by Mount Calvana. During migration, numerous interesting species of birds - the white stork, crane, wild goose, black winged stilt, bittern, flamingo, and the rare osprey - make this area their home. Devoted birdwatchers can observe the birds from the four different observatories using the instruments provided by the Oasis with easy access also to the handicapped. The Oasis holds a Meeting Hall with all the necessary teaching tools. It is an ideal encounter point for adult courses, and student laboratories. A nature bookshop is also present on the premises. Numerous paths for hikers and cyclists are being completed near the banks of the lake, while two beaches, offering umbrellas, beach chairs, and bar and restaurant service, cabins and hot showers. have already been created for the recreational sunbather. Lifeguards are present and a playground for children is also available. Lease of pedal boats and motorboats are also available for the visitor. For canoeing lovers, the ALBATrOS Association promotes canoeing at an amateur and competitive level on Lake Bilancino and other areas of Mugello by experienced and certified instructors qualified to teach safety regulations and techniques for water sports. It provides the lease of 1, 2 or 3 man canoes, and kayaks. For those who prefer sailing the Mugello Nautical Club at Lake Bilancino is open every weekend and organizes regattas and sailing lessons with licensed instructors for children and adults. The Kia Orana association manages a windsurfing school on the lake and is part of a circuit of international W.W.S. (Welt Windsurfing Schools, Germany) schools, recognized by A.I.C.W (Association of Italian Windsurfers). Courses for a minimum of three and a maximum of six people are organized from May to October in two formats: "Weekend formula": the 8-hour course is held on 2 consecutive weekends and "Full immersion": the 10-hour course is held every day from Monday to Friday. The school awards a certificate and an international licence at the end of the course and after passing a theory exam but private lessons and lease of equipment are also available. Last, but not least, Lake Bilancino's clean water is the perfect habitat for different fish which include: crucian carp, chub, black bass, and pike. Also coming from the many streams which flow into the lake are barbell, trout, and minnow, eel, tench, catfish, and bass. To maintain a certain natural equilibrium, and allow the fish to repopulate, fishing is not allowed everywhere on lake. To fish on the lake you need a licence and a membership card (free) with the rules and regulations of the lake, ("Bilancino fishing laws and regulations" L.R. n.25 - April 24, 1984), provided by the Province of Florence.