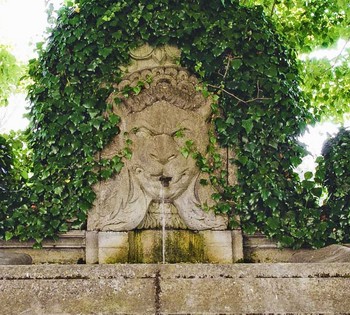 The source of the delicious mineral water, Acqua Panna®, was discovered high in the Apennine Mountains in Tuscany in 1927. Its pristine source, located at a height of over 1000 meters north of Florence, remains an unspoiled natural reserve nestled within the green forest and meadows on the slopes of Mount Gazzaro in Scarperia. Known for centuries to shepherds, farmers, and hunters from the area, legend has it that the Romans built the only road leading from Southern to Northern Italy through Scarperia going past the source in order to provide a good and well deserved refreshment to the tired but determined travellers. In the 1500's terra cotta pipes were used to transport the natural spring water from the source to the dwelling of the noble Florentine Medici family. The villa in which they lived in was cream colored, in Italian translating into "panna" gave the water its name and the emblem found on the Acqua Panna® label was originally found on the fountain where the water came out. In the 1860's, the Medici's built a small bottling plant on their farmland. The water was bottled manually and delivered to Florence by horse and cart and sold in demijohns (straw covered glass bottles). After World War I in 1927, the water started to be bottled on an industrial level. In 1959 the Italian beverage company, Sanpellegrino, purchased the bottling plant and in 1970, Acqua Panna® was launched as the first mineral water sold in plastic bottles. The plant quickly became one of the most technologically advanced bottling establishments in Europe. In 1994 the natural spring water was exported to the United States and soon after became part of the Nestlè Waters North America. Its excellent quality has earned Acqua Panna® a place on the tables of fine dining establishments in the U.S. and all over the world.