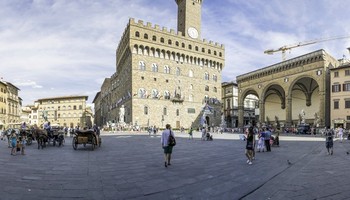 Entering into Piazza della Signoria from whatever corner, leaves you with a breathtaking view of a real medieval piazza full of old buildings statues, eating establishments, and shops giving one an array of things to see and visit. The building that probably stands out the most is Palazzo Vecchio; originally called Palazzo Signoria. The Palace dates back to the turn of the 13th century and artist Arnolfo di Cambio. In front of Palazzo Vecchio the Fountain of Neptune done between 1563 and 1565 by Bartolomeo Ammannati. An exquisite piece of work created for the wedding of Francesco I de' Medici and the grand Duchess Johanna of Austria. Due to vandalism, the fountain is an ingenious copy with the authentic one found in the National Museum of Florence to insure its safety. Other sights in Piazza Signoria to admire include the Loggia della Signoria and Loggia dei Lanzi which contains a gallery and numerous art pieces like the statue of Perseus With the Head of Medusa by Benvenuto Cellini. The Uffizi Gallery is probably one of the most visited buildings in the Piazza and the Palace of the Tribunale della Mercanzia, dating back to 1359 is also an interesting piece of architecture as the 16th century Uguccioni Palace. Another interesting work of architecture can be seen in the Renaissance style Palace of the Assicurazioni Generali (General Insurance) built in 1871. Without going into any of these historical buildings, one can remain in the fresh air and admire numerous statues, the most famous being the David by Michelangelo; like the Fountain of Neptune, the David in the piazza is an excellent example of a copy but the original has been moved to the Gallery of the Academy of Fine Arts for security purposes, and the bronze equestrian statue of Cosimo I of the Medici family, done by Giambologna in 1594, is also quite a masterpiece.