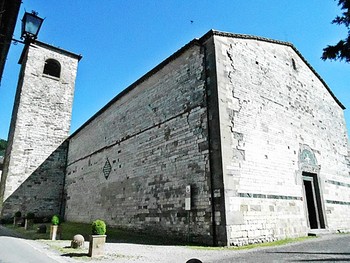 The Roman Parish church of Saint Agatha, found in the village of the same name, is situated only a short distance from Scarperia on an important medieval road, Via di Sant'Agata, that connects Florence to Bologna. The church dates back to the 11th century and is known as one of the most beautiful and important churches of the Mugello territory containing beautiful paintings and frescoes including a panel done by Jacopo di Cione portraying Our Lady of Grace to which pregnant women pray. On several special occasions, the panel is carried in a procession throughout the village. Other works of art in the church include the Madonna on the throne with Child, San Jacopo and Saint Agatha by Ridolfo del Ghirlandaio, a panel of the Madonna and Child holding a ring out to St. Catherine of Alexandria by Bicci di Lorenzo found on the base of the altarpiece, and a 16th century octagonal baptismal font of sandstone surrounded by a 12th century balustrade. Throughout the centuries the Parish Church of Saint Agatha has undergone numerous renovations but has been able to maintain a lifeline with its original structure. Built in limestone with touches of sandstone and green serpentine, it has a central nave and two lateral aisles. Other places to visit in Sant'agata are the Museum of Sacred Art of San Iacopo and the Exposition of Rural and Artisan Life by Faliero Lepri more well known as Leprino. The Museum of Sacred Art is set in an oratory dating back to the 16th century and exhibits a collection of art and garments from now abandoned churches and tabernacles in the Sant'Agata area. The collection has been divided into two sections; art and liturgical furnishings. Numerous pieces of great historic and artistic value are displayed including the Mystic Marriage of St. Catherine by Neri di Bicci (1430) and the Madonna and Child with the young St. John by Giovanni della Robbia (XV). The exhibition also documents important archaeological findings from the Palaeolithic period in Mugello to the Neolithic and Iron age, the Etruscans, and up to the Middle Ages. The Exposition of Rural and Artisan Life displays miniature reproductions of everyday life in Mugello represented by moving figures performing their artisan trade. The characters, each figure is dressed in period clothing, have their place on wooden platforms and are mechanically moved in a lifelike way. The reconstructions were all made by Faliero Lepri, better known as Leprino, and faithfully reproduce the movements characteristic of their trade with the tools, utensils, costumes and settings, reproduced in wood, fabric and papier-mâché. A delightful place to visit which takes you back to appreciate the almost forgotten artisan artist.