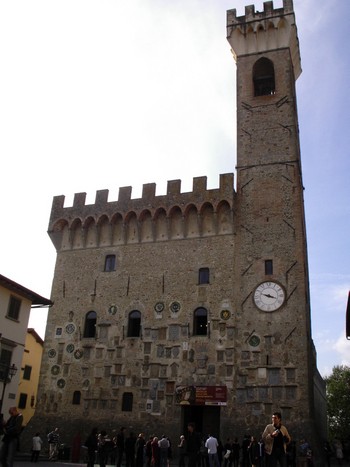 The borough of Scarperia in the province of Florence in Italy, has a population of a little over 7,000. Situated at the foot of the Apennines, this lovely hamlet is one of the most charming historical centers in the Mugello area.

Originally a settlement along the road to Bologna in central Italy, it soon became an important center for trade because of its strategic location. The heart of Scarperia is the main square with the dominating Palazzo dei Vicari, an antique residential palace dating back to the 14th century. The Palace we see today is the result of a series of additions made to the original nucleus of the tower. One of the first additions to the Palace was in the 1300's when a Captain's residence was added to the tower and in 1366 another series of restoration work was done to the building. Because of extensive damage due to the earthquake of 1542, the 16th century was also a monumental period for restorations which changed the appearance of Palazzo dei Vicari. Modifications and repairs were to continued throughout the 1600s after another earthquake in September of 1611. After damage done to the Palace in 1929 by the earthquake, restorations with an aesthetic outcome quite similar to that of Palazzo Vecchio in Florence. In 1960, Palazzo dei Vicari was once again damaged by an earthquake. Given the precarious state of the foundations, it was again subject of intensive consolidation and restoration work which began in 1980 an ended in 1999 with the restoration of the monumental quarters and the rebuilding of the north wing where the Museum of Knives is now situated. The façade of Palazzo dei Vicari is decorated with an aggregation of coats of arms of past Vicars, who governed the small town, demonstrating forever the prestigious role they held. Most of the shields displayed on the façade were done by Della Robbia and Benedetto Buglioni in glazed terracotta. Inside the Palace one can find and admire many frescoes from the Renaissance era. On the upper floor the exquisite Madonna with Child and Saints (1554) from the school of Ghirlandaio, is found. Another two historical and religious buildings in Scarperia's main square are also worth noting; the Propositura and the Oratorio della Madonna di Piazza. The Propositura, dedicated to the saints Jacob and Phillip, was founded by Friar Napeoleone dei Galluzzi in 1326. The church was redesigned and enlarged in 1870 by Mario Falcini and contains work done by other noted artists like Benedetto di Maiano, a tabernacle by Mino da Fiesole and a crucifix by Sansovino. The Oratorio della Madonna di Piazza dates back to the early 1300's and is the place where the sacred ceremony of swearing in the Vicars, taking the oath of obedience, once took place. In the center of the chapel on the ground floor there is a late Gothic tabernacle, dating back to the late 1400's. Besides the landmark of Palazzo dei Vicari, Scarperia has been eminent in the production of cutlery, with particular attention on knives since the 15th century. The knife industry in Scarperia goes back to the very first Knife Producers' Statutes and even today there is evidence of this activity which can be seen in artisan works done and displayed in the Museum of Knives. The layout of the museum begins with the story of the knife in its many forms. The culture and production of knives in Scarperia is the highpoint and fulcrum of the museum itinerary; the life and work of the knife-makers' families in Scarperia unfolds through memories, stories and topical issues, in pictures and in reconstructions of the workplace, of the social and family order, of the controversial relationship between the crafts professions and the farming world. The museum offers the visitor the possibility to put a knife together and thus see the complexity of apparently simple utensils like the table knife thanks to the assembly counter that the museum puts at the disposal of the visitor. The displays of knives and the range of production are reflected by objects which speak for themselves, like the work knives with the blade finished by the numerous grindings, the delicate "palm-knives", desk pen knives and the ever-popular Scarperia "zuava". Very near the historical center Scarperia offers many activities for the sportsman. Fisherman can enjoy fishing in the streams rich with trout, Golf lovers can choose form a variety of clubs in the area the closet being Golf Club 'Poggio dei Medici. If you are more into spectator sports the International Racing Circuit (Autodrome) invites you to participate in one of the many races held there all year round. Cultural activities are not lacking in Scarperia with the most noted being the 'Diotto', a re-enactment of the founding of Scarperia, held in September. The 'Infiorata', meaning flowered, is held on the last Sunday in May when the village is decorated with flowers and petals forming colourful patterns. Very near Scarperia is another lovely hamlet called Saint Agatha, dominated by a 12th century Romanesque parish considered the most important religious building in the Mugello area. On the road leading to Saint Agatha from Scarperia one can also stop to visit and admire the Oratory della Madonna dei Terremoti, the Madonna del Vivaio and the Torrino, a large mediaeval tower, set in a picturesque Tuscan garden. Another small, but important centre nearby, is Fagna and its parish church, dating back to 1018 where one can admire a collection of paintings.
FaLang translation system by Faboba