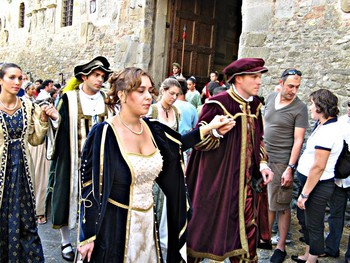 The powerful Medici family loved Mugello, and have left a great number of traces behind which can be especially seen in and around Tuscany. The landscape and architecture also bear their mark, easily recognized in the geometrical disposition of woods, farmland and the canalization of water. Taking a tour through Florence, and its surroundings, starting off along the Bolognese pass, the first sign of the Medici is found in Villa Demidoff's Park, in Pratolino. The original villa was demolished by the Lorena's but a number of monuments can still be seen in the park, among them the most important is without any doubt the fountain-statue Apennine. Continuing north along the Bolognese pass you arrive in San Piero in Scarperia, founded by the Florentine Republic in the 14th century, where one can visit Palazzo dei Vicari and the impressive 15th century Fortress of San Martino, built by the will of the Medici's. Following indications for Barberino or Motorway A1, finally getting off and onto a country road, you can arrive at Castle of Trebbio built high on a hill top on the remains of a feudal tower where you can enjoy a remarkable view of the entire valley. Getting back on the Motorway A1 you will note a park and villa along the road. The villa, Villa Cafaggiolo, was one of Lorenzo the Magnificent's favourite residences, used primarily for entertaining. Once again getting back on to the motorway, follow indications for Galliano and the Medicean monastery Bosco ai Frati. One of the oldest monasteries in the area, it was founded by the Ubaldiini and rebuilt by Cosimo I de'Medici. Among the many gifts that the Medici's left to the monastery, the most noted is a wooden cross by Donatello.