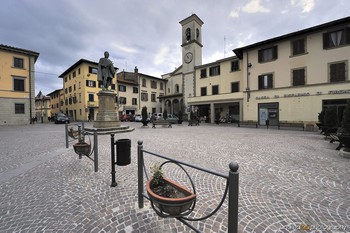 Vicchio is a village dating back to ancient times but began to gain importance especially around the end of the 13th century when Florence began the creation of the so called new lands in the Mugello with the aim of putting a halt to the feudal power of the Ubaldini. Vicchio's importance and economical strength grew rapidly until it became a magistrate seat, only to be eliminated later at the end of the 17th century. Vicchio is most remembered for being a stronghold of the partisan resistance during World War II and because it is the birth place of the famous artist Giotto, born in 1267, and Beato Angelico born in 1400. Giotto's birthplace is found near the Church if San Martino in the Vespignano quarters, where a permanent exhibition of Giotto's works are listed in chronological order. Legend narrates that when Giotto, son of a poor shepherd, was 11 years old, he was drawing a design of a sheep on the rocks when Cimabue, master of art, happened by. Cimabue was so impressed with the drawing that he asked Giotto's father permission to take on the boy as his apprentice. His father agreed and thus the remarkable career of Giotto began and continued to prosper with masterpieces found throughout Italy. A museum has been dedicated to the native artist and friar Beato Angelico. Vicchio offers a lot of interesting places to visit, above all the main town square, Giotto Square, where one can visit and admire the ancient Palazzo Pretorio, today seat of the municipal council and the Parish of Saint John the Baptist, dating back to the 14th centuryas a church, to be enlarged later in 1785 upgrading it to a Parish. Inside, there are paintings and frescoes, including the "Madonna of the Rosary" attributed to a scholar of Ghirlandaio. while in the district of Barbiana one can visit the Church of Saint Andrea in Barbiana founded during the 16th century. Inside, there is a very large fresco of Giotto's school representing the "Madonna with child and Saint Catherine" but is probably more famous as the place where Don Lorenzo Milani (1923-1967),priest and painter lived and founded his school, as well as the burial ground of his body. Rich in artistic heritage, the natural aspects of Vicchio in Tuscany with picturesque rolling hills and landscapes and are also valuable aspects of this village and all that surrounds it.